The National Football League is throwing its muscle and capital behind a push to get flag football onto the 2028 Los Angles Olympics programme as it looks to grow its global footprint.

When it comes to football nothing happens without the NFL’s involvement or approval, says the American Flag Football League (AFFL) founder Jeff Lewis, and that will be the case with efforts to secure flag a spot on the 2028 Summer Games roster.

„In all things football, at the end of the day the most important driving force at some level ends up being the NFL,“ Lewis told Reuters in an interview.

The sport is played at professional and recreational levels by men and women and will be on the programme at the 11th World Games being held next year in Birmingham, Alabama.

The appeal of flag football is that almost anyone can play.

While the game looks similar to tackle football, with passing and recieving, there is little protective equipment needed, with play stopping when a defender pulls a cloth flag from the waist of an opponent.

The International Federation of American Football (IFAF) will make the formal pitch to the International Olympic Committee (IOC) but, as with most things Olympic, the heavy lifting will be done behind the scenes.

„The IFAF is going to drive it. What we’ve said to them is you tell us how we can be of support. We are willing to do that and help in terms of influence and alignment and bringing people together.“

The IFAF, which is pushing a five-on-five small-field version of the game for the Olympics, currently has 72 member nations all of which have flag teams and with nearly 70% having organised leagues.

The U.S. tops the IFAF world rankings in every category but the top 10 includes some intriguing countries and markets such as Japan, India and Brazil.

„With the right support and with the right positioning, I’m very hopeful that we’re going to get there,“ IFAF president Richard Maclean told Reuters.

„The federations, the countries around the world have done a great job of kind of starting leagues and recognising the importance of their national teams. That hasn’t been the issue.

„The issue is a limited budget and how do we get the word out?“

Enter the NFL with its own network and new $110 billion media rights deal.

Eager to grow its global presence, flag is the entry point to what the NFL hopes will lead to a lifetime addiction to American gridiron.

Separately from IFAF, the NFL operates its own grassroots programmes.

Earlier this month, the NFL Foundation committed $1.5 million to its Flag-In-Schools programme that it estimates has engaged 13 million students since 2014.

The NFL has also invested in growing the game in Mexico where it says over three million children have played the sport.

„The global growth of the game that we think can come from that is great; more people playing any version of the game of football is good,“ said Leech.

„Flag can be a path to tackle (football) for some people and it excites countries and communities in the pursuit of Olympic medals so for those reasons we think it is great.

„It is a way for people to connect with the game and obviously LA 2028 presents a lot of unique factors that are interesting in terms of location in the U.S. and timing.“

Getting flag onto the World Games programme, where it will join other Olympic wannabes, is one thing but getting onto the Olympic roster is another.

Under new IOC rules introduced for the Tokyo Games, Olympic host cities can hand-pick a limited number of sports and propose them for inclusion if they are popular in that country and add to the Games’ appeal.

In Tokyo surfing, skateboarding, sport climbing and karate will make their Olympic debuts, while softball and baseball return for the first time since the 2008 Beijing Summer Games.

Surfing, skateboarding and sports climbing will be back for the 2024 Paris Olympics along with breakdancing.

With surfing and skateboarding almost certain to be on the LA 2028 roster, lobbying for the remaining spots is sure to be intense.

„In a way flag almost soccerfies football,“ said Lewis. „Flag is kind of the version of football that makes sense in international sport.

„Flag in a lot of ways is going to be the engine that makes American football into a world game for really the first time. 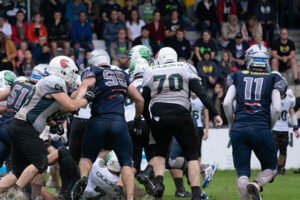 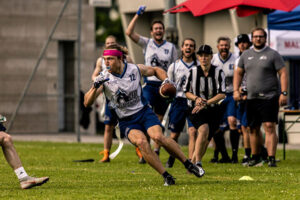 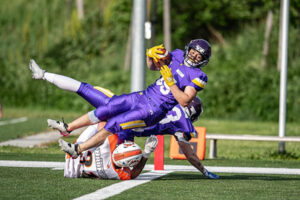 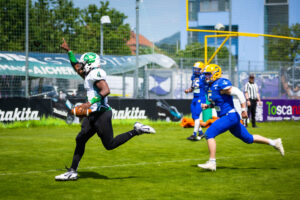